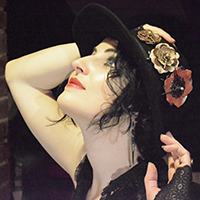 Sinéad Sanderson is an artist, jewelry maker and Real Estate entrepreneur. Born and raised in England, Sinéad moved to the US at 24 and currently lives in Virginia. After working in multiple different retail and service industry jobs on two continents, in 2012 Sinéad was given the opportunity to join B&K Properties. (See separate chapter on the Tomaykos) She is now the Acquisitions Manager for a highly successful family Real Estate team, and the systems and procedures she designed have counted for 70% of the residential growth of the business. In 2017 Sinéad also got her own Real Estate License.

Sinéad has never given up on her goals of becoming a successful artist, and over the years has had personal and commercial commissions from people, pubs, and even rock bands. In early 2017 Sinéad started her own Etsy shop to sell jewelry online, and has been working on expanding her Social Media reach, which grew over 1200% in the first six months. In June of 2017, Sinéad was also invited to be a showcase artist at an art gallery in Hampton, VA. It is her goal to open her own gallery in the next ten years.